Anyway, here I was, outside the bar waiting for my friends to come out. We had somehow gotten separated on the way out. I was sufficiently inebriated and slowly combing my beard and counting my brush strokes in an attempt to ease the anxiety of losing my friends in the crowd. Yes, I do carry a beard comb to the bar. My handy Sandalwood Beard Comb goes everywhere I go. After an all-around great night I was a little boy again; stumbling, mumbling and trying to find the people I came with.

I noticed a quiet squabble between a cute, girl-next-door-type brunette and a guy who meets every single one of the criterion on a douchebag checklist. I took a passive interest in the argument until I realized that the guy was literally trying to force this girl to go home with him. In his twisted and perverted version of logic; he figured that since he had paid for the girl’s drinks all night he had every right to go home with her. For some strange reason that I have never figured out to date, is why the girl didn’t make a big scene or even scream for help. She meekly protested as the guy all but dragged her towards his car. I suppose that isn’t important.

I put my comb back in its leather sheath and into my pocket. I briskly walked up to the pair and asked the girl if there was a problem. She quickly responded that king-douche was trying to force her to go home with him. I stretched myself out to full height and proceeded to get into a stare-off with this guy whose name I’m willing to bet my mother’s new juicer is Brad or Chad. Standing there at full height it was clear as day that Chad was a head taller than me and bigger than me. I was willing to see this through so I did not mind too much. That’s Dutch courage for you. That and I had to protect the honor of a real-life damsel in distress.

Something amazing happened. Chad looked at me, then at the girl, then to me again and turned around and walked away. No words were exchanged and no blows were thrown. He simply walked away.

I am confident that either one of two things happened in Chad’s little brain.

Whatever the case, I like to think my beard won me the battle of the wills on that day. Brad’s clean-shaven face simply did not match up to my full, well-manicured, picture-perfect beard. I intimidated my enemy. I take good care of my beard and this time it returned the favor.

As I said before, I am a self-styled beard aficionado. If you want to strike fear into the very heart of your enemy or simply grow a great beard I suggest that you find a good comb.

I get a little obsessive about things and for some inexplicable reason; my wife finds this quirk of mine endearing. I am always on the lookout for the best beard grooming products on the market. A good beard comb is of course at the top of my list. I have tried a variety of combs but this specific one has stuck with me for a variety of what I think are great reasons.

I have used many beard combs over the years and the first thing I noticed with this sandalwood beard comb is how it feels on the face. It doesn’t scratch your skin or catch and pull at facial hair. It literally feels like you are getting a facial massage every time you use it. The wood also stimulates blood flow to your face and brings to the surface all the nutrients you need for healthy roots and a full beard.

Another great reason I prefer using a wooden comb is no static. I no longer get those mini-heart attacks every time I comb my beard. This also means that I never run the risk of a frizzy beard.

The Zeus Organic Sandalwood Beard Comb is a medium-toothed comb and is perfect for medium and dense beards. I lean more on the denser side of the spectrum so it is nice to have a comb that easily glides through my chin curtain and detangles curly hair without breaking it.

One of my wife’s favorite things about this comb is the sandalwood scent that it leaves behind every time I comb my beard. She says that I smell like a lumberjack or what she imagines a real man should smell like. All I know is that she loves to cuddle up and smell my face and chin any time she gets the chance.

There are a lot of things that I love about this comb but I suppose if I had to choose one it would be how practical it is as a grooming product. The comb measures a total of 4.875-inch length making it easy to carry around in your pocket. It also comes with a genuine leather sheath to keep your comb clean and portable.

Lastly, it complements other beard products that I use including Zeus Natural Sandalwood Beard Oil with Organic Oils. The comb helps to distribute the oil evenly and all the way to the end. I notice my beard looks more lustrous and shinier compared to other combs that I have used in the past.

On a related note, I noted that I felt calmer and less anxious every time used the new comb. I narrowed it down to my perfectly calculated and impeccably timed brushstrokes but I felt there was something more about this specific comb. Every time I brush my beard I feel like my mood just got a little better depending on the kind of day I’m having. With a little research, it turns out that sandalwood is actually an active ingredient in a lot of traditional Chinese Medicine because for its sedating effects.

I get a lot of questions about how I manage to grow such an amazing beard. My answer is always the same; good grooming habits. I can talk about beard oils, shampoos, conditioners and a range of other products but that would require a separate post. If you want to instantly transform your beard with a bare minimum effort I suggest that you get a good quality sandalwood beard comb. I specifically recommend the Zeus Organic Sandalwood Beard Comb with Leather Sheath. 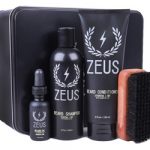